For the past three years, MSI has really been pushing a limit. how much power can be crammed into a small case and cooled properly with their Trident lineup. Now, after making some truly small systems MSI has given us the Trident X, a much larger version but also a darn powerful one with Core i9 9900 K and RTX 2080.
So let’s see what are the amazing feature of this MSI Gaming Desktop.


From a distance, the Trident X is a good-looking machine. I appreciate the smaller size. Although, it is unfortunate that it can’t be placed on its side like previous Trident models for integration into a home theater setup. After getting closer to the Trident X, things get a little less convincing like the front USB ports and their lettering is in red but then moving around to the GPU it has come in multiple accents and moving over to the other side things get even grimmer. I appreciate that there is a tempered glass panel there but behind that it isn’t even painted also the CPU airflow cutout is a kind of wobbly. 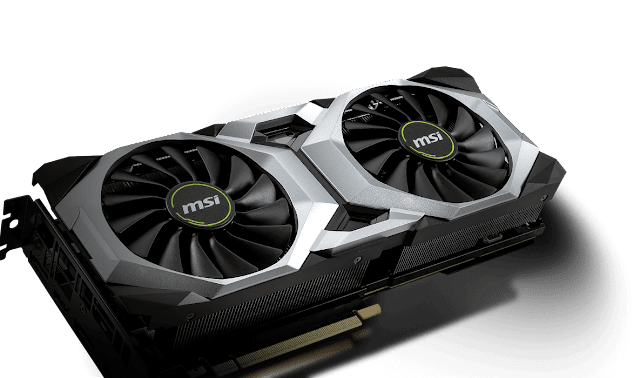 If we talk about the front, they provided two RGB lights. The bad things about these lights are that there is one brighter one faded that means they do not match. One more thing is that the tempered glass panel can be swapped out for a metal one. This is actually how the Trident X comes out of the box. I hope that MSI will fix this problem in the future since none of them are particularly big.


Now let’s talk about so many good qualities of this gaming desktop. 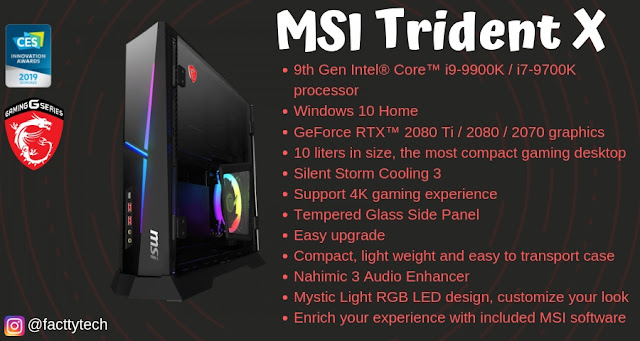 Now first let’s just take a look at the Graphics Card. It’s just like a full-sized desktop graphics card with a nice beefy cooler and lots of access to fresh air. this also means that upgrading the GPU in the future is relatively simple. As for CPU cooling, before even testing it there are no concerns here. The heat sink is massive and breathes in the nice fresh air and the motherboard that’s included is standard.
Actually, before talking about performance, I want to tell you about the inside of Trident a little bit more. I do wish that MSI had given the outside the same kind of attention to detail that they did here. Despite cramming so much hardware, MSI has still somehow allowed all of it to be easily accessed, upgraded, repaired and with great cable managing to boot. One person can easily detach the parts of this desktop. If you need to upgrade the storage, well, you can easily go through this by just following the guidelines. The power supply is also a standard modular affair either in 650W or in 454W. RAM is present just underneath the CPU cooling fan, this provides the RAM with a little bit of cooling but the real reason they did this I probably just that the standard 120 mm fan fit this way.


Performance:
Let’s talk about the performance of this gaming desktop. As expected from MSI, under a full synthetic load Ri9 9900 K8 core processor has no trouble staying cool with the temperature peaking at just around 80 degrees. It stays well above base clock settling in around 4.3 GHz sustained that’s even better than the Corsair one and that one was liquid cooled.
The GPU also doesn’t disappoint, topping out at 67 degrees and boost into a sustained 1875 Mhz and that’s after half an hour after 3D mark portrayal benchmark. It does this all while remaining very quiet even under full load.

So, all this adds up to then the Trident X giving us the expected desktop levels of performance. If you want a game to expect a heap of frames, if you want to render a video then don’t expect it to take very long. Basically, you’re getting huge hardware in a smaller case and don’t have to worry about building it yourself which I guess brings us to the make or break of any pre-built computer.


Now you are thinking about the price. since at the end of the day hardware is hardware and there is nothing particularly special about what’s going on in here.
So my recommended config comes in $2500 which is a pretty good price especially when you compare it to the Corsair One but it’s actually $500 more expensive than building it yourself which also gives you little more flexibility and could result in you ending up with a system that looks more to your liking.
So, if you want to give a computer by yourself then yes, you should do that but if you don’t want to build it yourself maybe try anyway it is not actually that hard.

THANK YOU FOR READING…..